Hailing from Portland, Oregon is an indie trio that has started to take Europe’s music scene by storm. Having supported Alex Clare on his American tour earlier this year, Rags + Ribbons are about to release a brand new EP that is set to see their US success reach faraway shores. 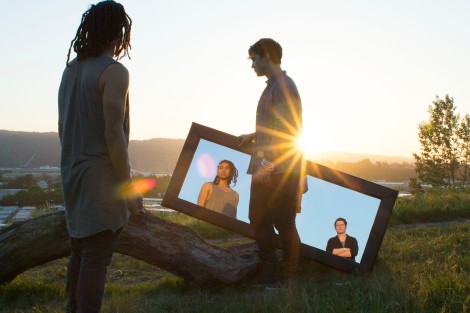 Back in 2012, the band released ‘The Glass Masses’, a debut album that stormed music blogs across the US. Opening track ‘Even Matter’ became an instant hit with music bloggers and, has since, seen them make a move over to European waters, having recently been playlisted by over 20 radio stations across the UK, France and Spain. The success of this track saw the band listed on MTV’s new music pages and reviewed by Magnet Magazine and The Music Slut.

Now with their second single, ‘Rubikon’, already making its way across the internet, Rags + Ribbons are getting ready to welcome even more attention from both the US and further afield. They are also gearing up for live shows, including Los Angeles’ Silverlake Lounge and a homecoming gig at Portland’s Doug Fir Lounge.

Formed back in 2011 by college ‘friends’ Ben Weyerhaeuser and Jonathan Hicks, the third member of the band, Chris Neff, joined a few months later after the boys posted a Craigslist advert. Having come from very different backgrounds, it has taken the trio several years to find their ultimate sound but ‘The Glass Masses’ proved that Rags + Ribbons are set to enjoy success way beyond their hometown of Portland.

With influences like Muse and Arcade Fire, Rags + Ribbons have stayed true to their harmonic routes – with both Ben and Jon having sung together in an A Capella band back in college. None of the band takes lead vocals but instead the trio focus on strong harmonies mixed with anthemic melodies, which makes for a sound that is somewhere between Mumford & Sons and 80s pop group Haircut One Hundred, both hailing from the UK.

“This is a really exciting time for the band and I can’t wait to see the reaction that we get from the new EP. The success of ‘Even Matter’ was pretty overwhelming for us and to be invited to support Alex Clare in our hometown was a dream come true.

“It has been a really challenging journey for us but has made Rags + Ribbons even stronger. Jon and I were far from friends at college – having been from very different backgrounds – but we knew each other’s talents and were determined to make it work. My family founded the Weyerhaeuser Company, one of the world’s largest private owners of timberlands; and Jon grew up in Flint, Michigan, which is known as one of the hardest communities in the US. This, of course, had an impact on our working relationship but when Chris joined us and completed the third pillar of the band, we all took the Meyers Briggs personality test in an attempt to understand each of our characteristics better. You hear so many stories about bands starting because two childhood friends had a dream but we were far from that and that’s what makes the band so special.

“We talk everything out and make every decision after a lengthy discussion, which may seem extreme but has helped us to achieve the sound that you hear today. We’ve stayed true to our A Capella roots but we’ve teamed that with melodic rock and classically-inspired piano to create our own style of indie pop.”

Rags + Ribbons’ new single ‘Rubikon’ is available now to download, with an EP expected in early Fall. The band has also been signed up by Tomes PR UK and USA, and their tracks are currently being pitched to music supervisors for film and TV through Gotham Records at LA Sync.

To hear their new single and find out more, visit www.ragsandribbonsmusic.com.